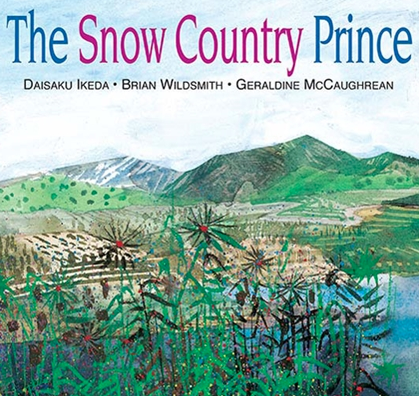 When the Snow Country Prince – guardian of the birds – asks Mariko and Kazuo to look after the swans during the winter, they take the responsibility very seriously. They rescue a swan that has been attacked by wolves and spend the winter nursing it back to health, never giving up, even when life looks its bleakest.

Swans: Soaring Into the Skies of Hope

This essay from SGI President Ikeda first appeared in the Dec. 1 2018, issue of Boys and Girls Hope News, the Soka Gakkai’s monthly newspaper for the elementary school division.

When the cold winter winds start to blow, swans, known as the “messengers of winter,” make their way to Japan.

Some of you may have seen them on lakes, ponds or in rice paddies. They are large, beautiful and snowy white. From long ago, people have loved and cherished swans. I myself have taken photographs of them in Japan and in various places around the world. I also wrote a children’s picture book,

The Snow Country Prince, which tells the story of an injured swan, who wishes to fly again. In addition, there is a well-loved Soka Women’s College song called “Oh Swans.”

The swans that migrate to Japan ordinarily live in the far north of Siberia, a region in Russia that is cool even in summertime. When fall arrives in Siberia, however, snow and ice cover the land, making it difficult for swans to find food, so they travel south to the warmer temperatures of Japan.

Their journey from Siberia is about 2,485 miles. It takes them two weeks, flying with all their might, to arrive here.

When swans fly long distances, they do so in what is called a V-formation. The air movement created by the wings of the lead swan reduces wind resistance, making it easier for the swans in the formation to fly. When the lead swan tires, one of the other swans takes its place. They help one another out in this way as they fly together.

When we help and encourage one another, our strength multiplies. That’s the wonderful thing about teamwork.

The whooper swan, the species that migrates to Japan, weighs between 17 and 26 pounds. How can such a heavy bird take off from the water?

It’s like jumping over a gymnastics vault. To clear the vault, you need to make a running start to gain momentum. In the same way, these swans run at full speed on the water’s surface for about 32 feet while flapping their wings, until they finally take flight and begin the long journey to their destination.

I’m sure many of you have dreams for the future, such as the kind of a person you want to become or the things you want to do. You may be worried whether you can fulfill your dreams. But what matters is having the courage to simply try. That will become your running start toward your dreams.

Even if you don’t have clear dreams for the future right now, why not try setting yourself a goal that you are comfortable with? It could be something like going to bed earlier and rising earlier, tackling a school subject you find difficult or helping your parents out. The important thing is to set a concrete goal.

Once you’ve decided, your running start begins. One day of success will equal one day of growth. If you continue challenging yourself in this way, you will eventually discover your dream and soar high into the future.

Chanting Nam-myoho-renge-kyo gives us the strength to spread our wings broadly so that we can follow these paths wholeheartedly together.

In his writings, Nichiren Daishonin talks about swans in illustrating the power of chanting Nam-myoho-renge-kyo to invigorate our lives (see “King Rinda,” The Writings of Nichiren Daishonin, vol .1, pp. 985–86). In my mind’s eye, I can see all of you, my dear friends of the elementary school division, soaring through the skies of hope in a V-for-victory formation, just like the swans.

Together, let’s take the first courageous step in our running start toward the new year!

There is nothing I look forward to more than being able to converse with you, my precious friends, and to see how much you have grown.