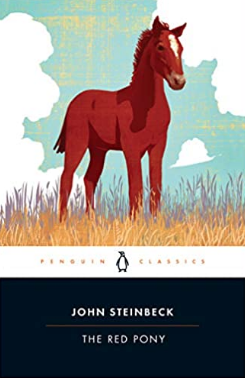 The Red Pony is an episodic novella for young-adults written by American author John Steinbeck in 1933. The full book was published in 1937. The Red Pony was Steinbeck’s third novel after Cup of Gold and Pastures of Heaven. During the Great Depression, Steinbeck also wrote a series of “California novels,” or Dust Bowl fiction that included Of Mice And Men, and Grapes of Wrath. East of Eden was written shortly before the author died.

Find The Red Pony on Amazon or read a Goodreads review here:

“I was completely blown away by this short novel. Completely. Blown. Away. I’m not going into a lengthy review here, but let me talk about some points.

Okay, so this novel isn’t really about horses. I’m thinking there are a lot of people out there missing the point. The Red Pony isn’t what I would call one cohesive novel, but rather a collection of several glimpses into the farm/ranch life of Jody. The whole point of the pony is that Jody is learning to grow up, and he’s learning that life isn’t all rainbows and butterflies. There’s death, there’s loss, there’s grieving, there’s anger, there’s sadness. Life doesn’t always have happy endings, life is unfair, and the people we idolize in our own lives will at some point let us down. That is what the pony is about.“